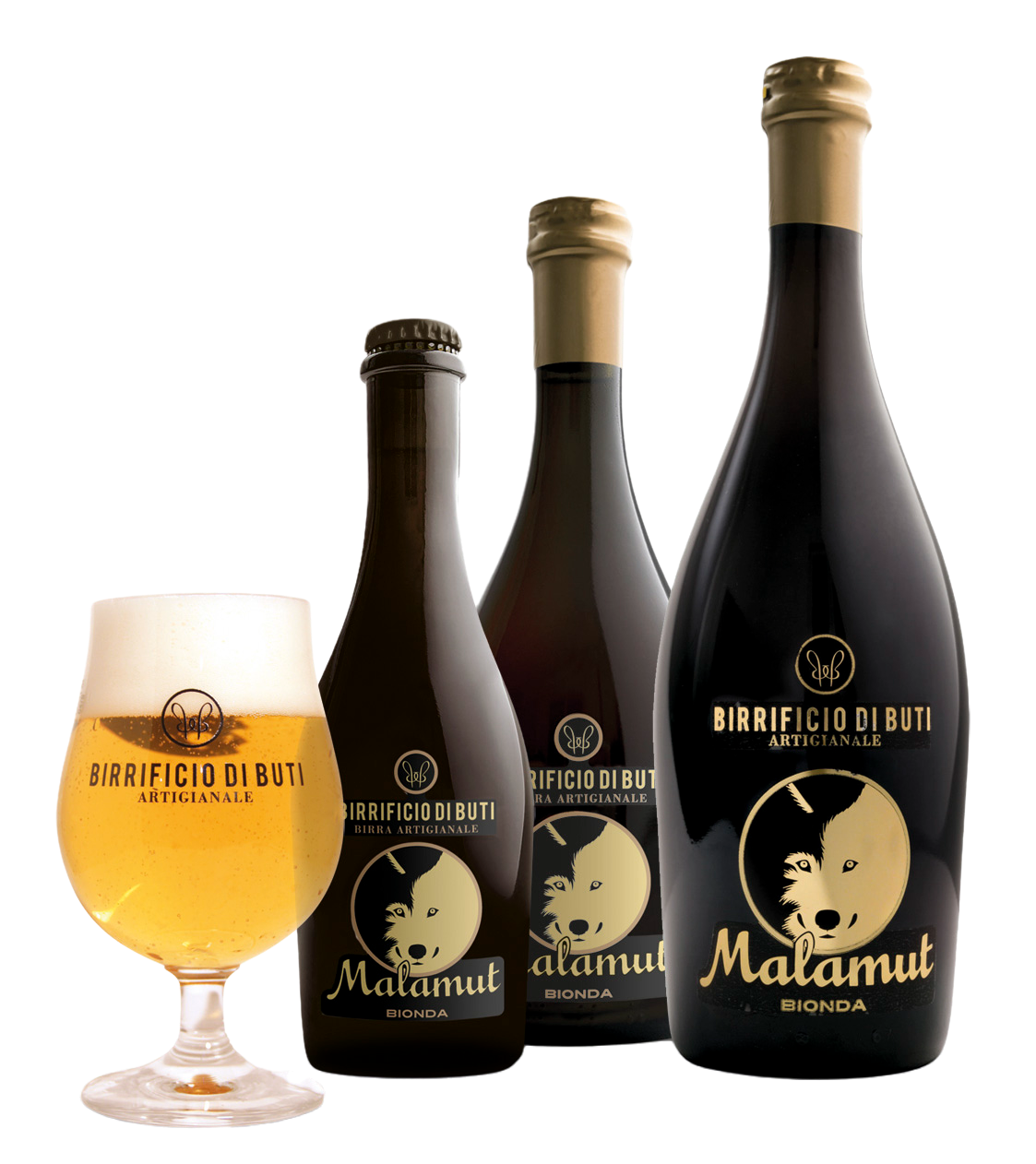 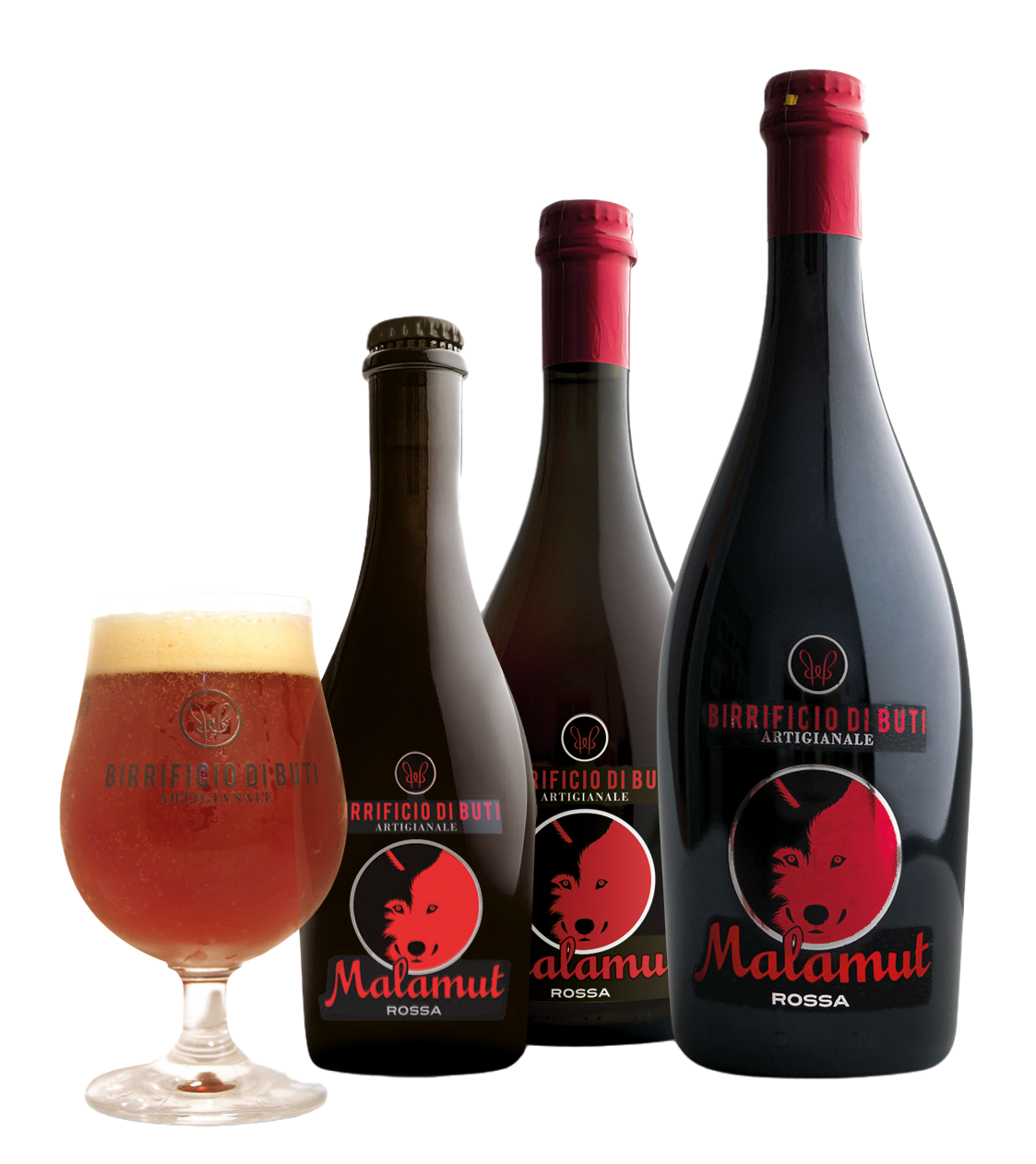 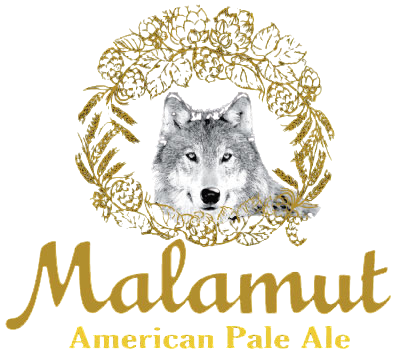 A bit bitter beer but with adequate malt presence that makes it balanced and pleasant to drink. The use of American and Pacific hops gives an aroma of citrus, balsamic and tropical fruit. Lightweight, fine and compact foam. It blends perfectly with tasty meats such as roast lamb or spicy dishes or more simply Hamburger or cheeseburger. 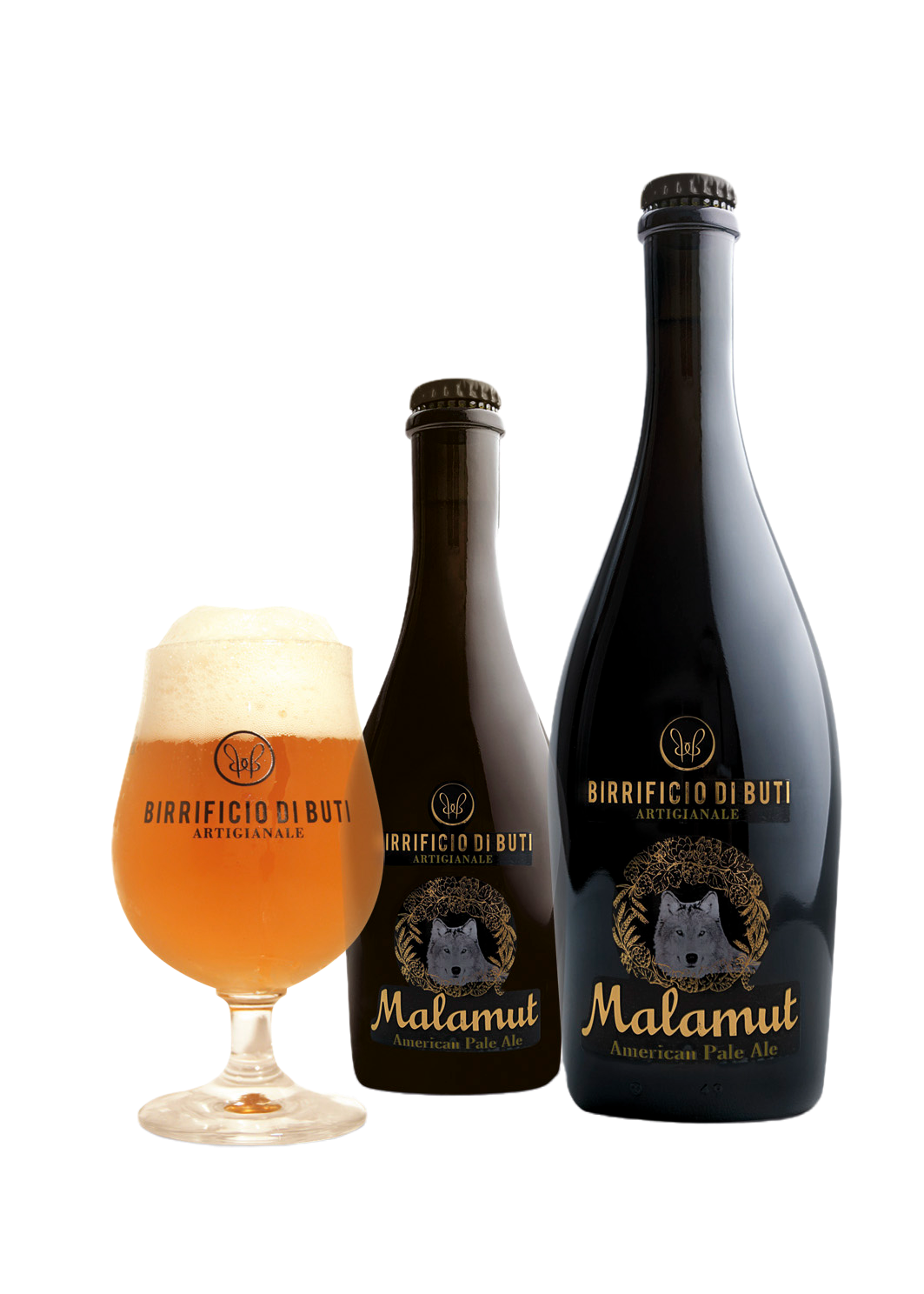 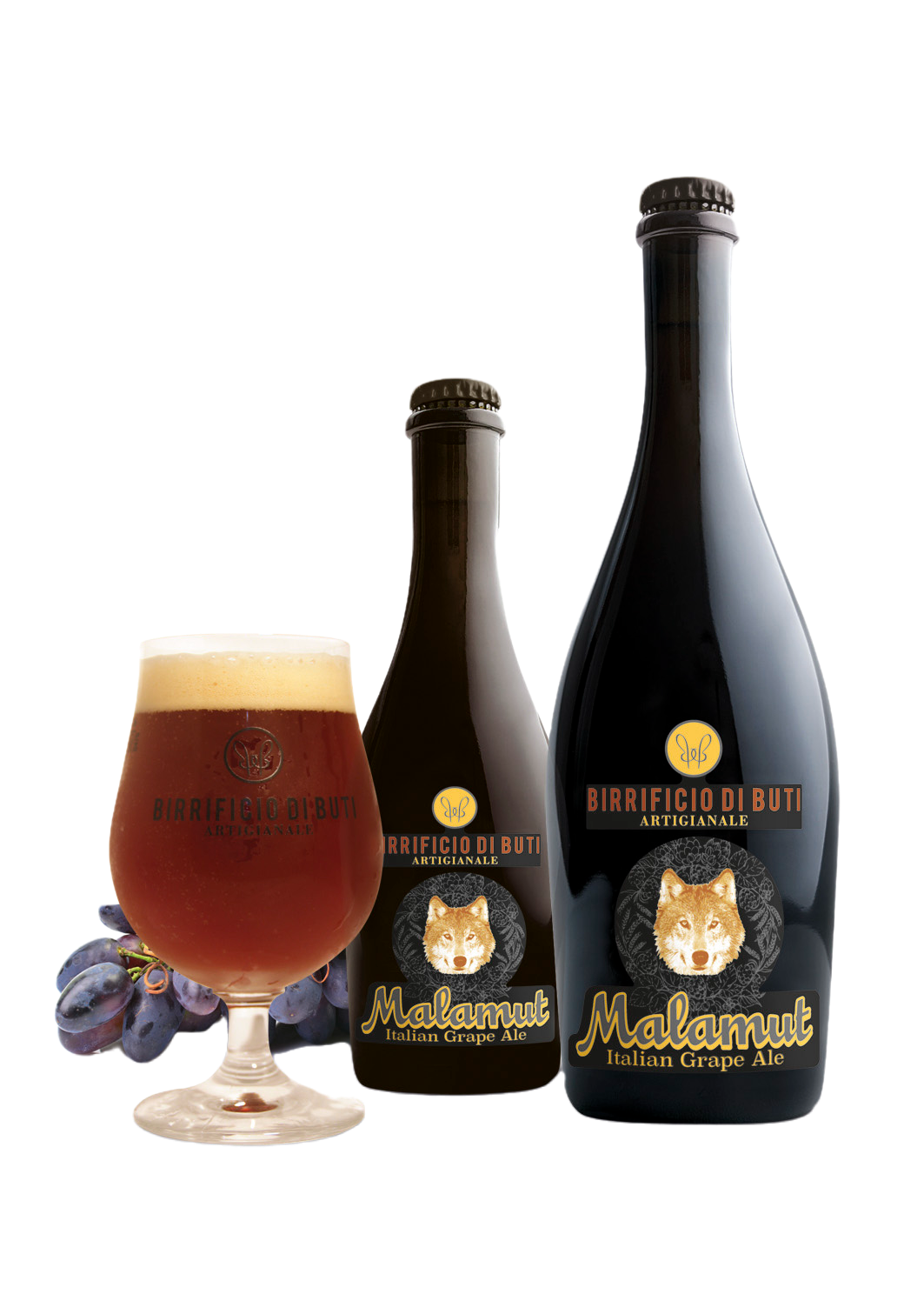 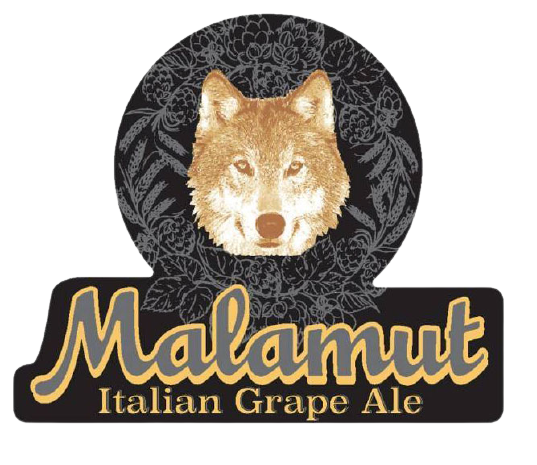 With the first cold falls, chestnuts arrive, from which comes a brunette beer, full bodied, fragrant and tasty, intense on each face, soft and passionate.. The light sweetness contrasts with the bitter hops of the hops It is accompanied by tasty middle-of-the-century foods such as vegetable soups and cereals or legumes. Great companion for chocolate and coffee cakes. 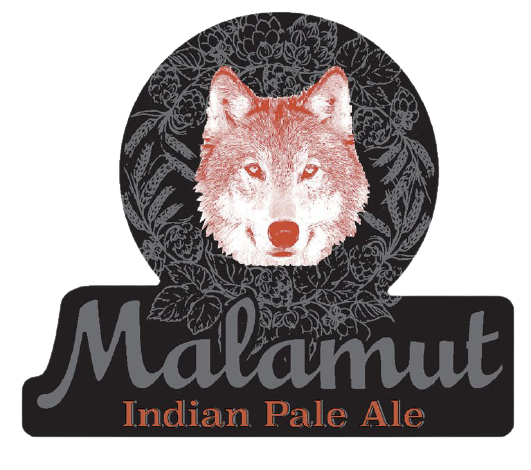 A moderately strong and very well attenuated beer, characterized by a citrusy and herbaceous aroma and taste, where the hops sail unchallenged towards a dry and aromatic finish. Bitter but pleasant ending Great as an aperitif with swizzle sticks, fried white meats, roasts and grilled meats. 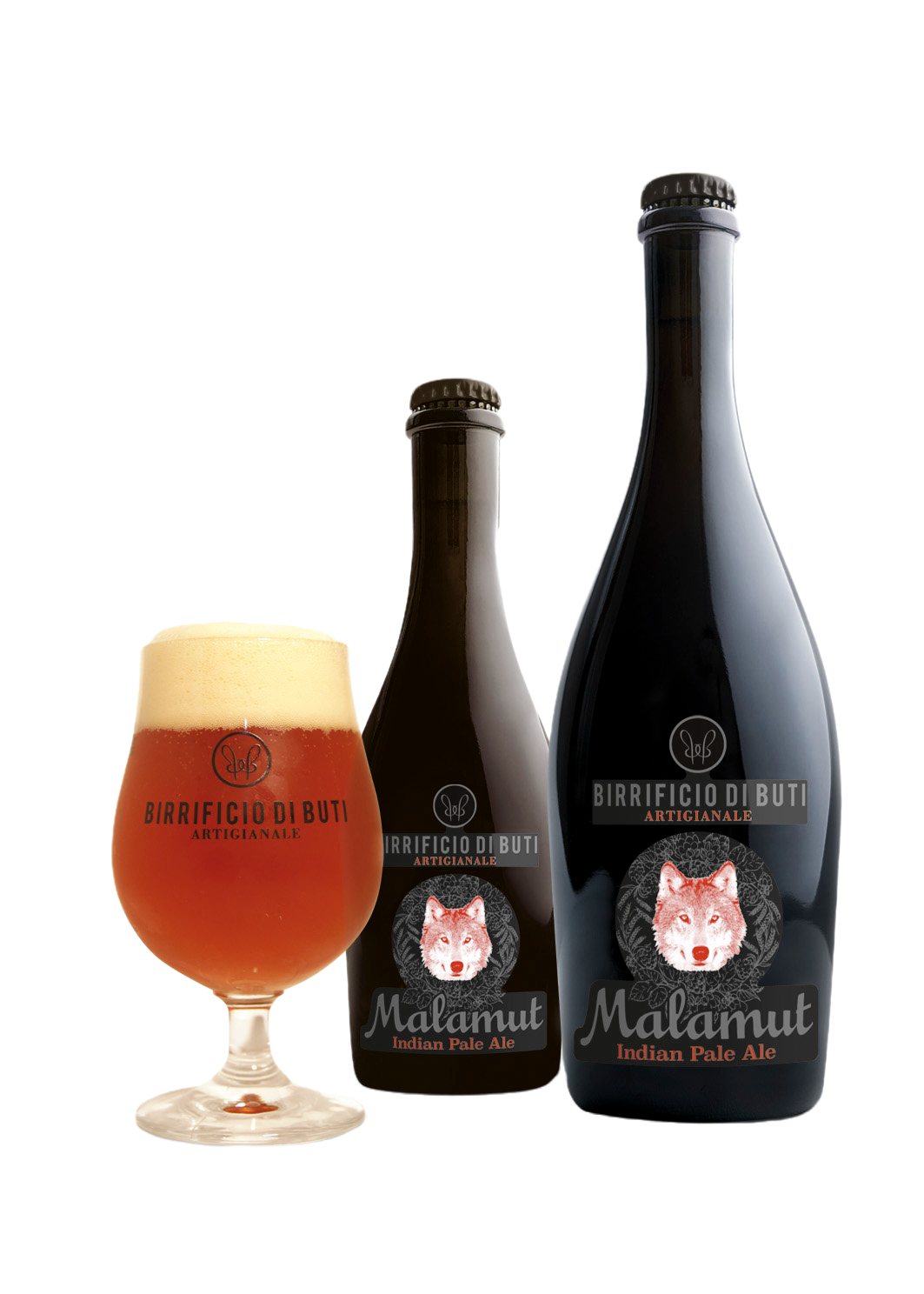 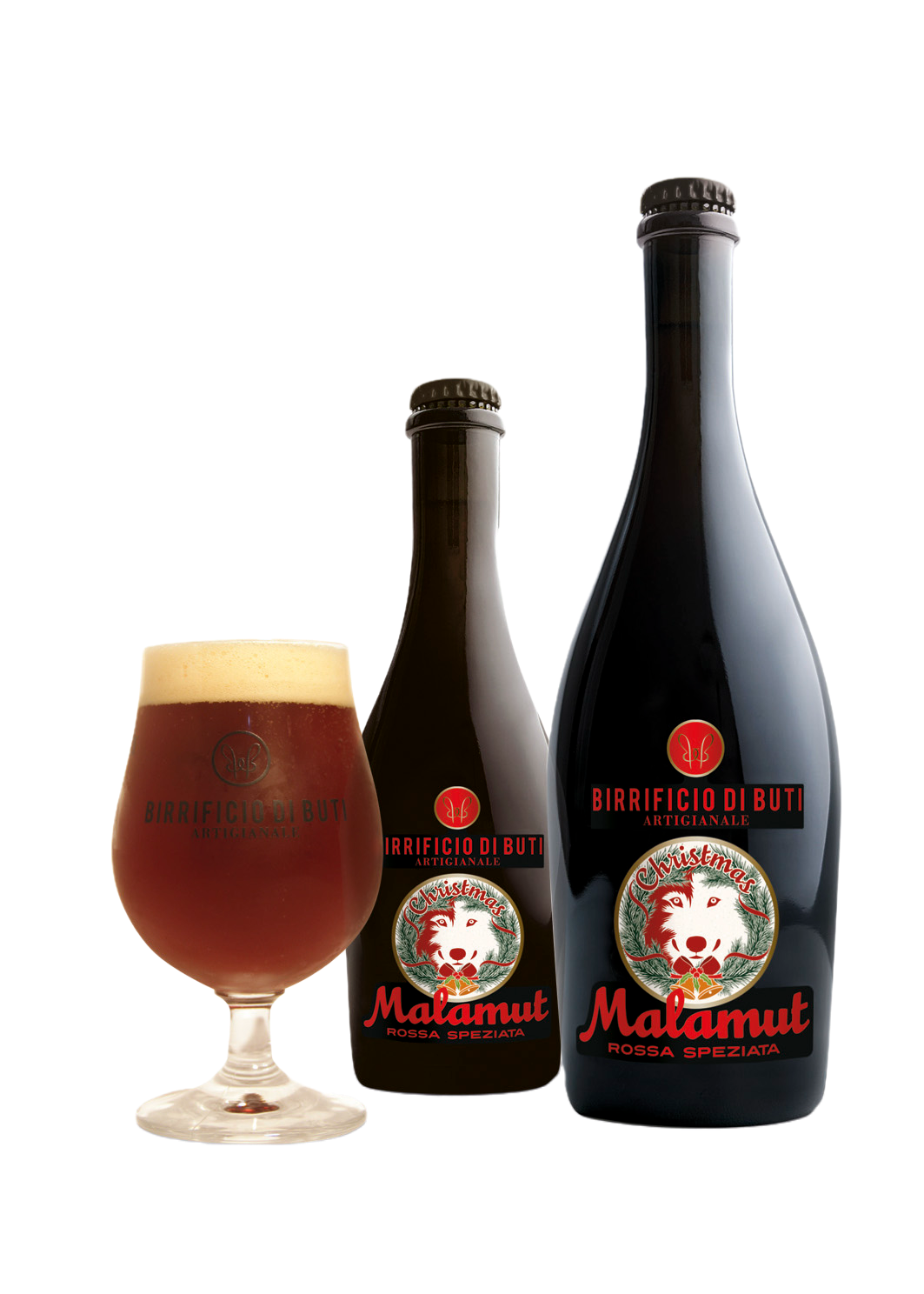 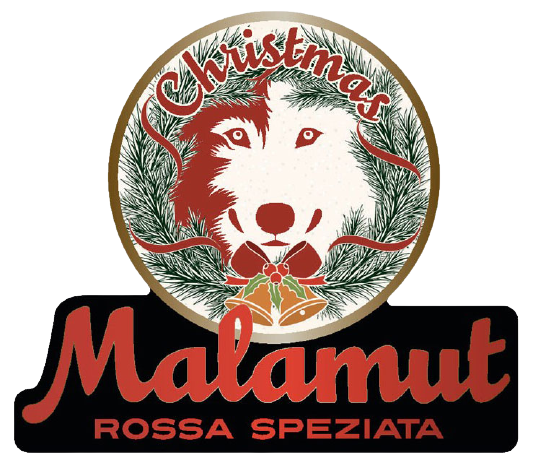 It could not miss a Christmas beer among the range! A round beer, compact and persistent foam, harmonious and slightly intense spicy aroma, spicy aromas that are perceptible but delicate, excellent companion of Christmas sweets, game and sauces, as well as a meditation beer to drink in the company of friends or as an after dinner at the hearth of a fireplace.

With the first cold falls, chestnuts arrive, from which comes a brunette beer, full bodied, fragrant and tasty, intense on each face, soft and passionate The light sweetness contrasts with the bitter hops of the hops It is accompanied by tasty middle-of-the-century foods such as vegetable soups and cereals or legumes. Great companion for chocolate and coffee cakes. 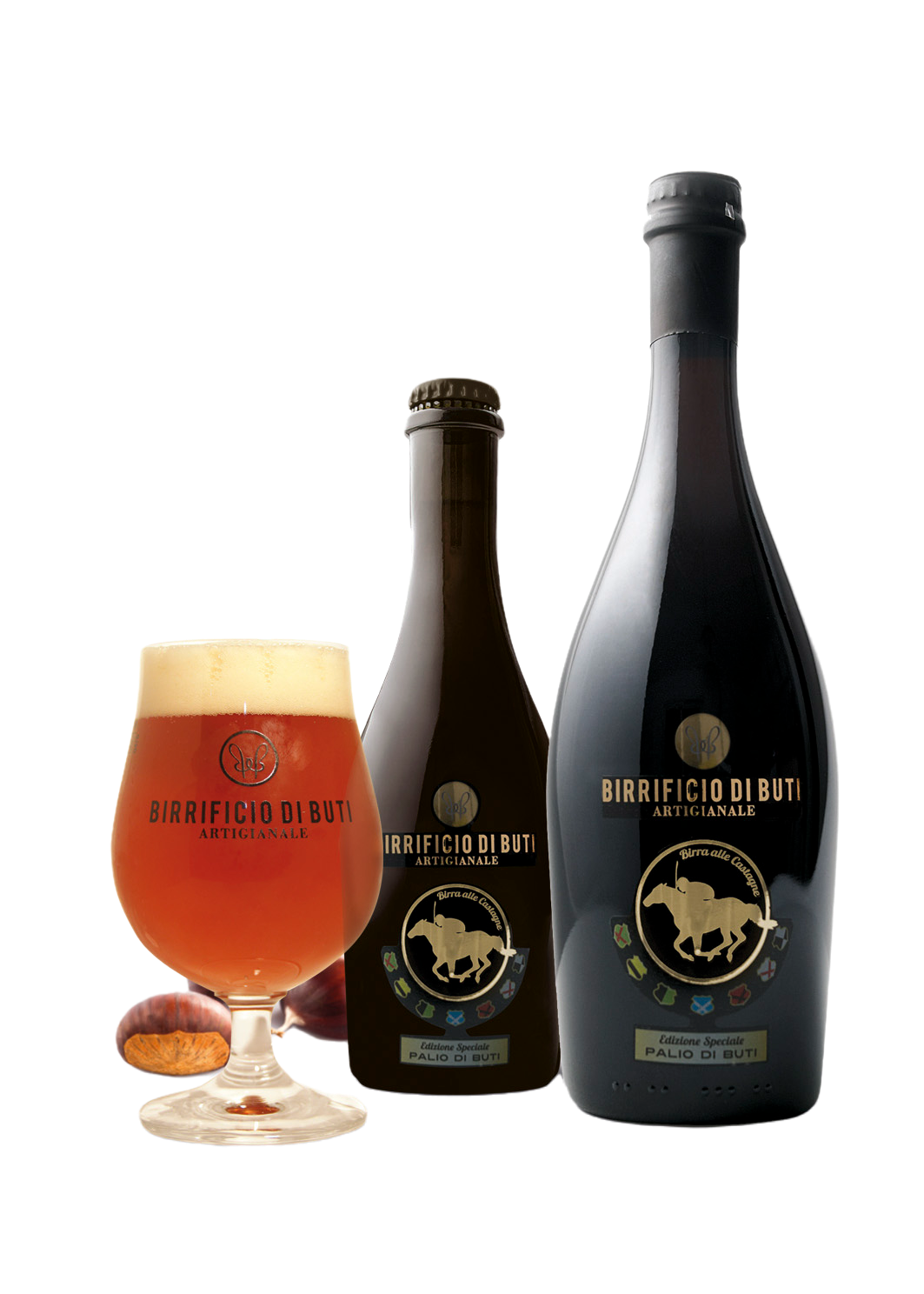 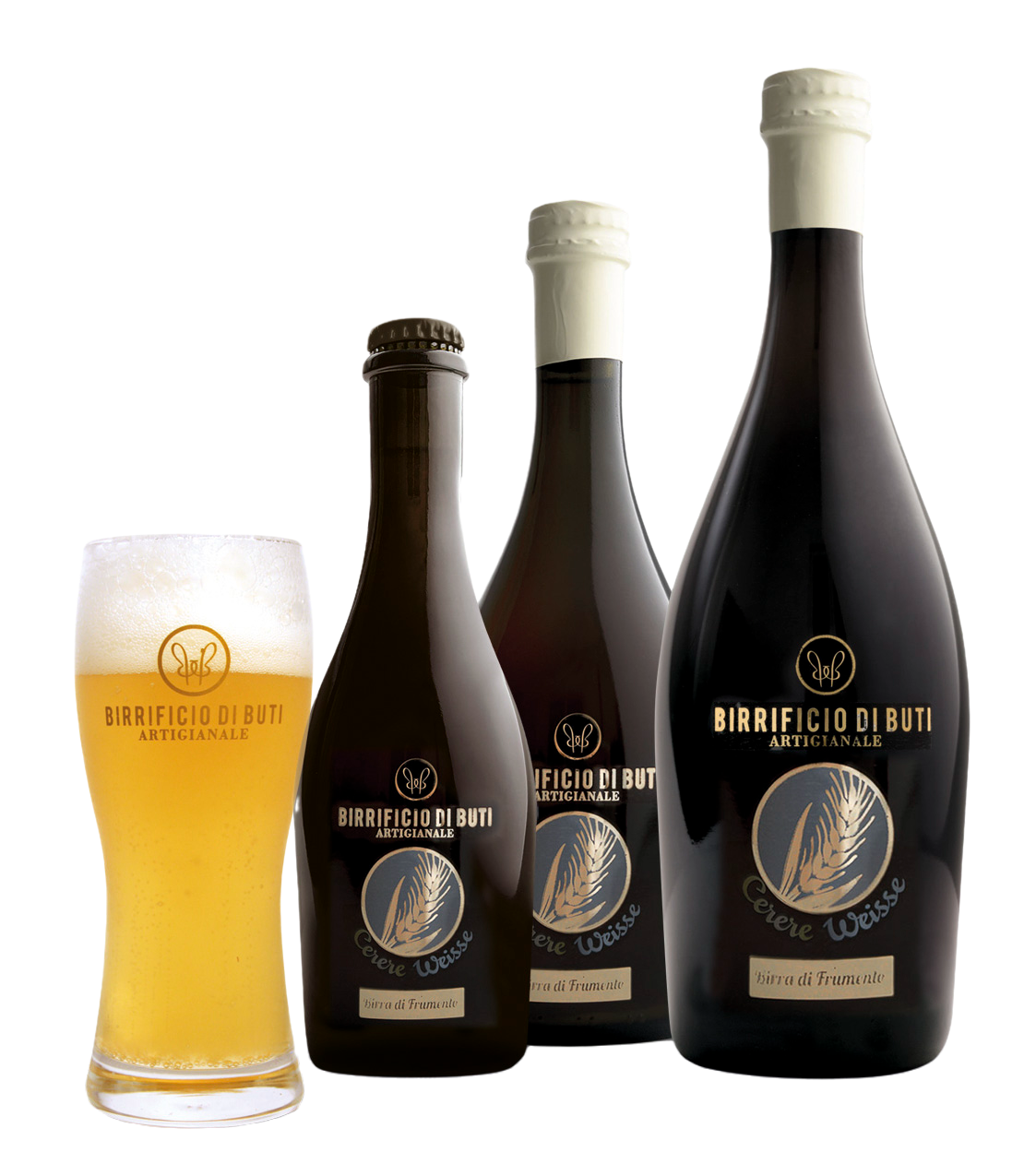 A tasty refreshing wheat beer, with a typically turbid appearance due to the presence of suspended yeasts and where grain malt gives a unique body a light flavor typical of the weiss. . It is perfectly suited to fresh, delicate and not too tasty dishs like a bresaola carpaccio with parmesan cheese and rocket salad or a starter appetizer. Ottimo anche come aperitivo.

An American pale ale style beer with 100% English malts as the style requires, but flavored and embellished with fresh hops grown and harvested on our territory... from the hopyards directly to the brewhouse! A good balance between hints of malt and hops freshness with a light bitter, but not too intrusive, finish. Compact and persistent foam. Excellent match for fresh dishes such as carpaccio of both meat and fish, pokè, but also as a simple thirst-quenching drink thanks to the low alcohol content and the slight bitterness. 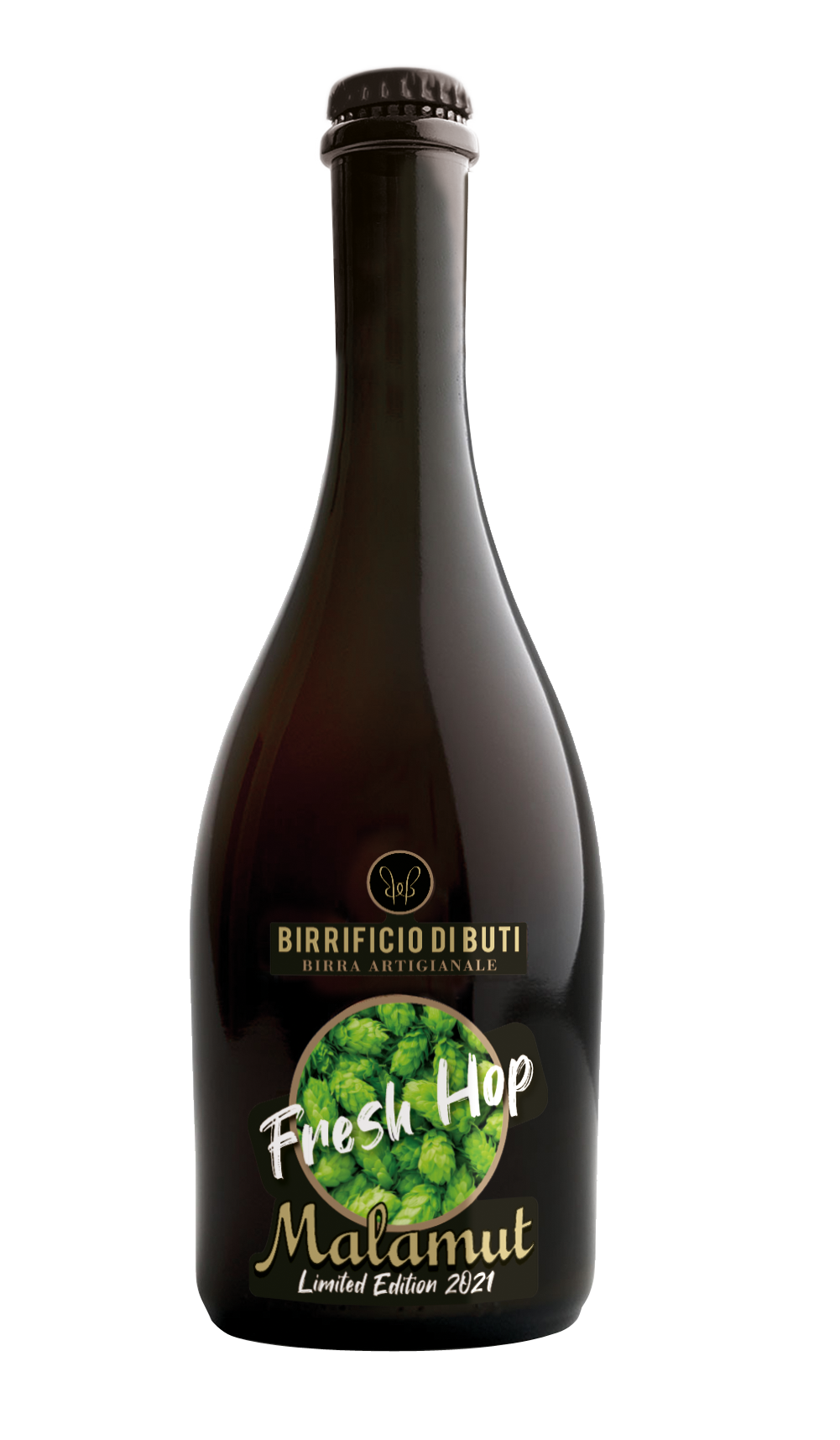 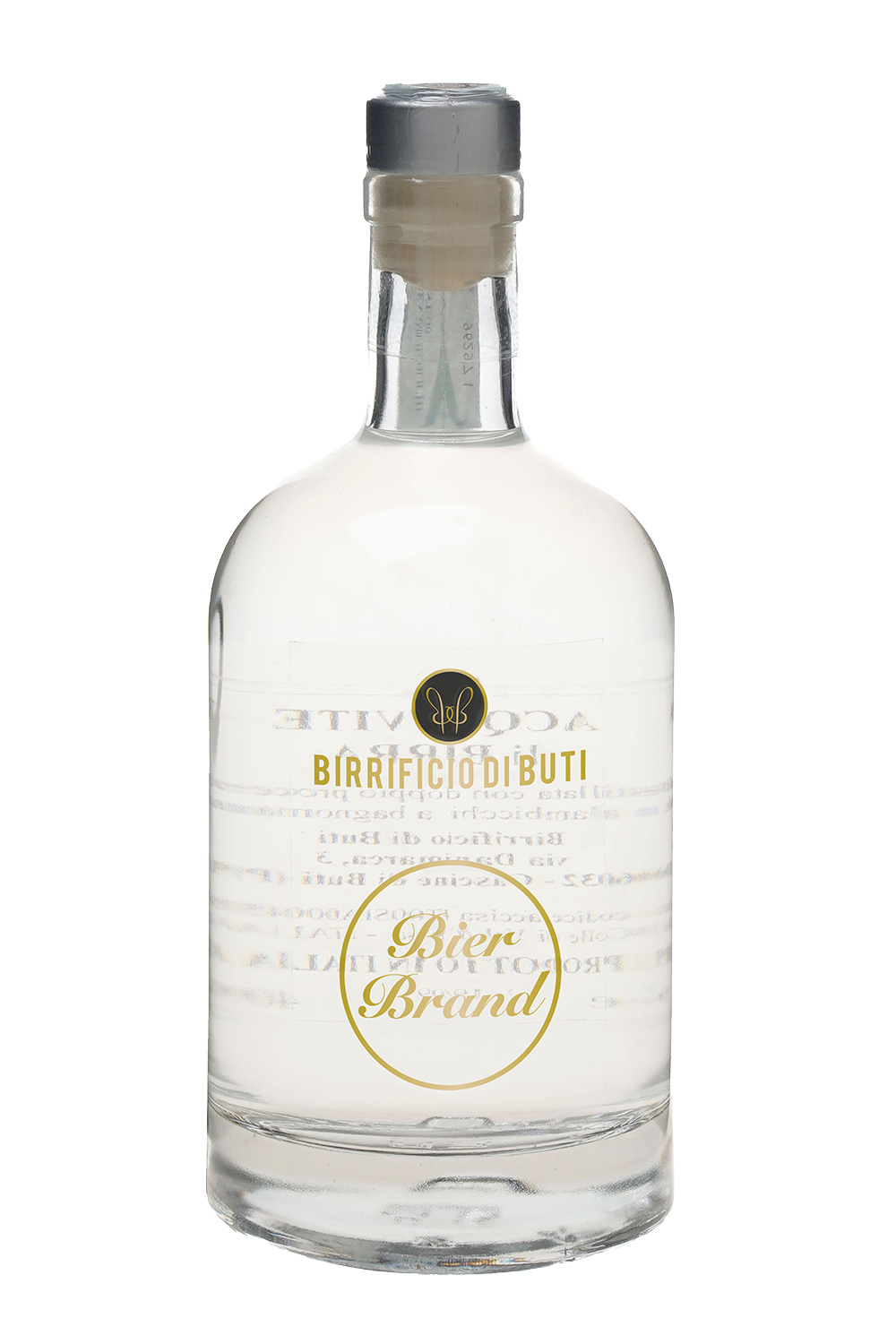 Bierbrand is a beer brandy, obtained by a double process in copper stills.

Most beer is made up of water, which is also the most abundantly available raw material. Not for this reason it is the easiest ingredient for brewing, since if a beer is good it owes it above all to water, which must therefore be endowed with particular virtues. In particular, the main reason for interest in water is related to the pH of mixing the water with the grains in the mash. Everything else is secondary. As a basic rule we can consider that the suitable water is the one that does not have particular tastes in taste, that is drinkable and fresh.

The malts that will be used in the beer will affect the color, aroma and body of the beer you build. The spectrum is very broad and with the malts we have available today it is possible to produce very light or very dark beers, practically black. The grains and other ingredients (flakes, etc.) that provide the must with fermentable material are divided into different categories that determine their technique of use. The first distinction is between ingredients that need mashing (cooking) and those that don't. In fact, the latter have already undergone a transformation that has converted starch into more or less fermentable sugars. It is as if a kind of mini-mashing had taken place inside each small grain of malt. In this process a caramelization or roasting also took place (to varying degrees). All malts with the name starting with Cara- belong to this category, together with the crystal, chocolate and black malts. Their usefulness is that they can be used with simplicity in the production method from malt extract. Their function is to add / vary color, taste, aroma (and in some cases, as in Carapils, body) and not to constitute the “bulk” of the fermentable material: they are obviously also used in the “all grain” production technique; in this case they undergo the mashing process together with the other grains only for ease of use.

Another of the materials that characterize the beer drink is Hops. Let's try to find out more about this plant that can give the bitterness and aroma to our beloved drink. There are therefore three types of hops: bitter, flavored or mixed. Hops is a climbing plant which uses the female inflorescence which has the typical cone shape, to understand each other we use the flower. In beer, hops have several functions: they are an excellent preservative, a stabilizer (especially as regards the aroma and foam of the beer) and a flavoring. The female plant flower contains several organic substances, each of which serves a specific purpose for the brewer:

Resins - provide the bitterness
Oils - are responsible for the aroma
Tannins - cause the coagulation of proteins during boiling and fermentation.

The quantity of bitterness extracted from hops increases with boiling time, while on the contrary the aromatic contribution (which is volatile) decreases. Therefore, more “aromatic” hops are added towards the end of boiling, giving up a contribution of bitterness which would in any case be limited; the more "bitter" hops are added at the beginning, as their aroma may not be pleasant. The characteristic data of a hops in terms of bitterness is its percentage of Alpha Acids (AA%) while Beta Acids are in some way linked to taste and aroma.

The fermentation of beer would not be possible if there were no beneficial fungus to act as a catalyst, yeast. General notes: Yeast is a unicellular organism, which reproduces by dividing and creating copies of itself. Its nourishment is the simplest sugars (fermentable ones). Brewer's yeasts are grouped into two large families:

1. Saccharomyces cerevisiae, called high fermentation, works in the temperature range of 12-20 ° C and ferments on the surface, creating a rather compact foam mass. It gives the beer a fruity and aromatic flavor.
2. Saccharomyces uvarum (Carlsbergensis), called bottom fermentation, works at 4-15 ° C and ferments on the bottom. Low yeast beer is generally not fruity and produces a beer that favors malts aromas.

There is also a particular category of beers (Lambic) in which fermentation occurs spontaneously, thanks to yeasts present in the air. These are typical of an area near Brussels, Belgium. Let's skip over this point, however, since the possibilities of making a beer of this type at home are very limited. But how does fermentation take place? Essentially in three stages:

1. Breathing: yeast uses oxygen dissolved in the must to store energy for future activity and reproduction - this phase lasts from 2 to 24 hours
2. Fermentation: yeast cells reproduce very quickly (the population doubles every 20 minutes) and metabolize sugars, transforming them into ethyl alcohol and carbon dioxide - the fermentation phase generally lasts from 3 to 6 days
3. Sedimentation: when almost all the sugars have been consumed, the yeast begins to settle due to lack of food on the bottom of the fermenter - phase 1 - 2 days

Hit enter to search or ESC to close